The Fu Manchu Complex is a new play currently playing at the Oval House.  It is written by Daniel York, a colleague of mine, who I have known for over 20 years and who like me, is British born Chinese.  Like me too, he grew up here in UK and trained to be an actor in the 80s, like me not thinking his whole career would be defined by the fact that his father was born in SE Asia.   In fact it is arguable that were it not for the fact that his father is Singaporean and mine Guyanese (not exactly close, geographically – though they do look similar) Daniel and I would never have met, let alone done so many projects together.

Our entire careers have been defined by this one thing.   And guess what?  Given how little significance it had on my (our) lives growing up this is a frustrating thing.   We both dealt with this in similar yet different ways.  At the recommendation of the Chinese detective himself, David Yip, I changed the spelling of my professional name 20 years ago to appear more East Asian.  Daniel recently adopted this cynical approach, adding the name Loh to his actual name.  It is a smart move in this shallow industry.

When I first saw Daniel, he was acting in a production of Chay Yew’s first play, Porcelain.   It was in a tiny fringe venue, the Etcetera, and the house was not even full.  It was a great performance in a great show and this led to him going to the RSC for a season.  When my flatmate, Tony, started in Stratford, around 1993-94, Daniel was already there and we were introduced.   I even went to watch one of the plays he was in, Moby Dick.  We both, 20 years ago, did not realise the significance our being East Asian, albeit only half, would have on our fledgling careers.  Here was he, at the RSC, playing non-ethnic parts and I had just finished playing Hiawatha at the Royal Lyceum, and Lorenzo in The Merchant of Venice at the Sherman and a big tour of Wales.  There was good reason for optimism that our ethnicity would not affect our careers.  It didn’t pan out that way.

Cut to the RSC’s Orphan of Zhao 20 years later in 2012 and it is incredible and saddening to think that Daniel York (Loh)’s 1993 appearance in that season was the last time an East Asian actor had been employed at Stratford before then.  I don’t remember Moby Dick very well, but I do recall Dan having a significant part, which only highlights how retrograde a move the casting of The Orphan of Zhao (where only three East Asians of 17 were cast – in minor parts) actually was.

Daniel and I have dealt with this unforeseen and enforced straitjacketing of our acting careers in similar ways.  We have both become activists for the rights of East Asian representation in the industry, being the two East Asian Equity reps on the committee which got the Opening the Door thing going,  have both been brave enough to speak out about it in an industry where this is mostly feared, and we have both written satires to highlight the relative low status the East Asian has at the Equal opps / diversity table.

The play, The Fu Manchu Complex, is Daniel’s.  I won’t attempt a conventional review here. You can read other bloggers and reviewers, who have done that.  What I will say about it is this.  Go and see it.  I saw it myself on Saturday and laughed out loud on numerous occasions.  It is genuinely funny in places and the entire cast is East Asian in heritage.  Its cheap and its easy to get to and its funny.  And its short.  All the things that I like in a show.

More importantly than all of that, however, and what makes it more significant in my opinion than any of the other wonderful plays that can be seen this month featuring East Asian actors, ( Chimerica, World of Extreme Happiness, Golden Child ) is that this was written by a British East Asian writer.  This is so rare that surely this in itself needs to be supported.  That it aims to turn a spotlight on the whole issue of East Asian stereotyping itself, which Daniel and I know from 1st hand experience all too well, and does so in an at times hilarious way, is the bonus.

The Opening the Door initiative, which is in some quarters being debated as responsible for this current unprecedented showing of East Asian actors is nothing of the sort.  The Fu Manchu Complex is the nearest thing that is of real significance in opening any door whatsoever.  While I am all for China being the flavour of the month and am a great fan of the great American Asian playwright David Henry Hwang, the fact that a new British East Asian playwright is being brave, funny and clever is the one thing that I don’t want to overlook.  I predict in fact that in another 20 years, of all the productions this year, this play will be the one with the most historical interest and significance to the advancement of British East Asians and our struggle to be taken seriously.

I did my first bit of acting in some time yesterday, rehearsing a reading which will  be performed later tonight at a Tamasha Theatre “scratch night” in Shoreditch.  Its an extract of a new play, Summer Rolls, written by a British Vietnamese writer, Tuyen Do.  I have yet to meet her, but it is a good solid play and will do well, I think, and she is obviously highly talented.

My old colleague and comrade in arms, Daniel York, has his play, The Fu Manchu Complex, currently in rehearsal for a run that starts soon at the Oval House theatre.  He first mentioned his incredulity at the racist language and imagery present in the Fu Manchu novels (by author Sax Rohmer) to me some 14 years ago and I am pleased for him personally that he has managed to get funding for it.  I can’t wait to see it. He has worked hard for years to get to this point and congratulations to him.

At last it appears that British East Asians are getting their voices heard on British stages – as well as appearing on them.

The industry is currently pleased with itself for putting on Chimerica (Almeida and West End) and #aiww (Hampstead) and The World of Extreme Happiness (The RNT’s Shed),  not to mention Miss Saigon and employing an enormous number of East Asian actors.  This year we also had a resurfacing of David Henry Hwang in the capital, with an excellent production of Yellowface before summer and Golden Child coming soon.  Its all looking quite exciting.  It is as if the RSC’s Zhao-gate crisis has started the ball rolling.  But has it really?

Before anybody starts noshing anyone off about how great things are now and how things have turned around, I feel I need to add a note of caution.

Just over a year ago, the RSC had not employed a single actor of East Asian descent on their stages for 20 years.  The RNT had hardly done much better.  They acknowledged this, and  a mini online movement, dubbed Zhao-gate, ensued.  This eventually  resulted in an Equity-led event, “Opening the Door”, which was designed to spotlight this historic imbalance and.. er…open the door for us East Asians.  Given the unprecedented action in the industry at present, it appears to have worked

But does Zhao-gate and Opening the Door have anything to do with what is happening now?  The current fascination with China has led to the above 2013 productions and it’s not before time.  But does this really mean that the industry’s slate of historically overlooking East Asians on its stages has been wiped clean?  Has the door been opened?  NO.  Emphatically not.

Employing East Asian actors in an East Asian play is not really something the RNT should get overly praised for, it is only the done thing.  Zhao-gate notwithstanding.  Of course I acknowledge it’s good that they are doing the play at all, but not only is it about time the RNT produced something about / set in East Asia, does a production in the Shed really  give the Royal National Theatre a get out of jail free card after all these years?   Hmmm…  After careful consideration, I conclude no.  Not in itself. They could do better.  As could the RSC and others.  I am worried that they actually might feel they have done their bit for East-West race relations, when they could in fact make a more impactful statement and do it easily now.

It is very simple and has been in their power all this time.  The RSC and the RNT (in fact any theatre – though these big publicly funded flagship theatres should lead the way) must cast East Asian actors in roles that are not East Asian, in much the same way as they cast black and (south) Asian actors.  In fact, when they are about to cast a black or (south) Asian actor in a non race specific part, if they really wanted to redress the historic imbalance they should look twice and recast him with an East Asian!

Film and TV are not excluded from this, incidentally.  It is rarely the case that an East Asian pops up on the telly in a part that is not specifically related to his being from East Asia.  Casting directors are not open to receiving a submission for an East Asian actor when the part in Casualty is calling for a Dr Gupta to say a few lines.  But why not?

Opening the Door should have been called Opening the Eyes (subtitle: of the Industry).

In the Casualty example, the writer is making his intentions clear to the casting department that this Doctor can be played by any ethnic actor.  Yet the chances of being seen for this part as an East Asian actor are low.  It happens, but not that often.  You just need to watch tv to know this is true.

TV and theatre don’t even do ethnic monitoring of their auditionees, something we East Asians all think they should to avoid this institutional racism, if Opening the Door is anything to go by.

Even when Ethnic & Diversity monitoring happens, we as a group are all bunched into one afterthought, as you can see from the BFI Ethic and Diversity Monitoring Form, below. 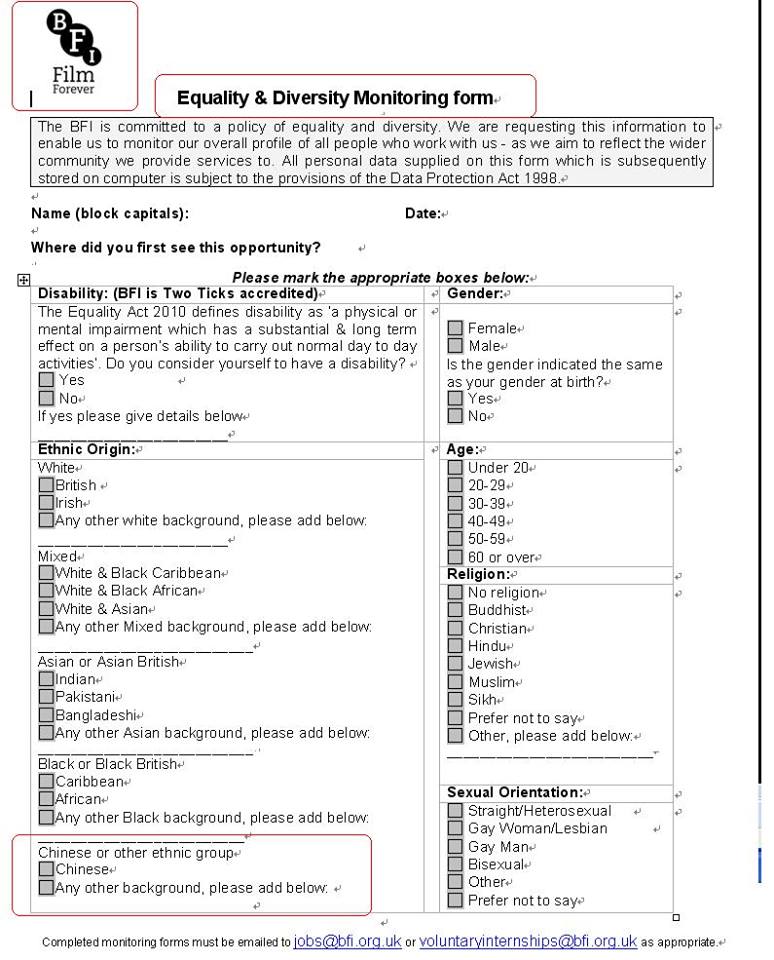 Note that while on this form it is acknowledged that people can be ‘Black British’ or ‘Asian British’, there is no such similar acknowledgement given for the Chinese or (to add insult to the Japanese, Koreans, Thais, Malays, etc.) “any other backgrounds”.

We still need to keep an eye on that door.  It doesn’t look open to me yet.